Hattiesburg City Prosecutor and local attorney Alexander Ignatiev is known to be a staunch advocate for small businesses in Mississippi, and his latest push back on behalf of his clients against the American Family Association's statements is evidence of his advocacy.  At the heart of the issue is the Religious Freedom Restoration Act signed by Governor Bryant and the resulting "We Don't Discriminate" campaign initiated by Mississippi businesses.

Ignatiev alleged in a letter to the AFA that the organization made defamatory statements when the AFA posted on its website a list of business supporting the "We Don't Discriminate" sticker campaign and saying, 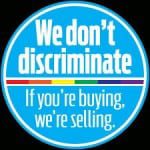 “Ironically, this sticker represents the very promotion of discrimination...against the freedom of religious convictions. Businesses that display this sticker believe Christians should be forced, by law, to embrace homosexuality and deny their faith in personal business practices.”

Ignatiev fired back alleging defamation in the AFA's claim that the businesses were discriminating based on religious affiliation, a violation of the 14th amendment. Ignatiev wrote in a certified letter,

These statements are defamatory and actionable per se under the laws of the State of Mississippi, because they accuse my clients of unlawfully discriminating against persons in violation of the 14th Amendment and the Civil Rights Act of 1965, a felony punishable under 18 U.S.C. § 241, subjecting my clients to a penalty of up to ten years in prison. They are also materially false, and provably so, in connection with my clients, The Golden Growler, The Keg and Barrel, and La Finestra. These statements have been published with actual malice, which means that they have been published with reckless disregard for their truthfulness, or with actual knowledge of their falsity, which removes any First Amendment protection from those statements.

The AFA backed down and has since removed the language in question. 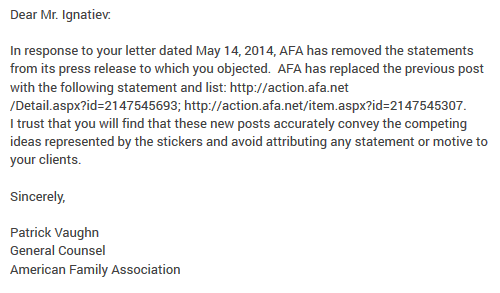 Ignatiev's full letter is below. If there is a Google error simply click to download the document and the window will populate.