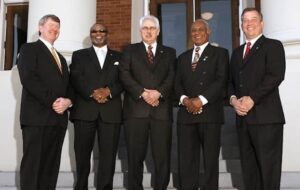 Normally, with competent, honest people in positions of the public's trust they work to save money, to get the most for the people they serve. Then there are those who enter politics, and act in a manner through sheer greed or stupidity, where they or their friends benefit financially.  The latter seems to be more common in Hattiesburg and Forrest County. One example of highly questionable decisions by local politicians can be seen with events connected to Forrest County's Beat 3 Barrentown voter precinct.

It all started in 1985 when Forrest County Beat 3 Supervisor and Board President, Lynn Cartlidge, pushed for the board to sign a 30 year lease for land belonging to two of his friends, Jim Dukes and Bud Holmes, in order to construct a new voting precinct in his beat. It was just three acres at the time, and on the 15th of May, 1986 bids were put our for its construction, and the building and other improvements were constructed using taxpayer money.

Five years later, in 1990, the county decided to expand the area from 3 acres to 9 acres, and some time later, additional improvements were made to the property, including a walking track, funded by Forrest General Hospital. It is important to note, that the county had never negotiated an option to buy the land for a predefined price in the 1985 or 1990 leases at anytime prior to making the improvements.

This after all is a deal among close friends and for the benefit of the citizens, right?

Then, 24 years later, the lease term is coming to an end for the Barrontown voting precinct and activity center. By this time Lynn Cartlidge is no longer making decisions on behalf of the citizens on Forrest County Board of Supervisors, but instead is now making decisions on the board of Forrest General Hospital.

When Cartridge retired from the Forrest County Board of Supervisors, Burkett Ross, who was then on the board of FGH, campaigned and won Cartlidge's vacant seat.  Ross then put Cartlidge up for his vacant seat on the Board of Forrest General Hospital. So, the two effectively swapped places.

Several years ago, the board of the hospital decided to start giving the Forrest County Board of Supervisors money for their community funds. Each supervisor has their own fund, which is funded by both Forrest General and taxes from Forrest County.

When Jim Dukes and Bud Holmes lease was nearing completion in 2014, Burkett Ross paid $193,415 from his community fund to buy the Barrentown voting precinct property. It's interesting that the funding didn't come out of the general fund, but instead came from Ross' recreational fund, which includes monies from Forrest General hospital.

Jim Dukes was the Forrest County Attorney and FGH Attorney at that time of this transaction, and he was a direct beneficiary to the transaction.

Generally the Supervisors do not oppose another board members when they decide they want to spend their recreation money. In this case, according to the minutes, all supervisors voted to approve Ross' request to pay for the precinct building once again.

Documents below include the original 1985 bid sheet, the lease agreement between the parities, the appraisal report, and deed.