October 13th 2003 would be a day that Forrest County Election Commissioner would never forget. Equipped with a Billy Badge and a law enforcement scanner listening to HPD and FCSO dispatch, Charlie Phillips was returning from a coaches and umpires meeting in Laurel.  It was then when he heard on HPD dispatch of a high speed chase involving a Tyrone Jackson.  Jackosn was approaching Hattiesburg, headed south from Covington County.  Phillips joined in the chase in a 2003 white Ford Escape.  The suspect, Jackson, happened to be driving a white Ford Explorer.  MHP officers Joe Seals, Thomas Little, and Donny Rayburn were dispatched from Highway 98 in Lamar County to engage in pursuit of a “white SUV.”

According to court records,

“he (Phillips) was under the impression that he could ultimately be of some ‘assistance’ to the Hattiesburg Police Department.”

However, the Hattiesburg Police Department was not going to engage in the chase. 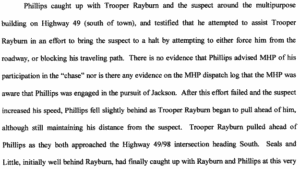 “Unknown to the MHP, HPD, or his own dispatch, Phillips had taken up a position in his personal vehicle, a 2003 White Ford Explorer (D-18), in the approximate area of Eddie and Hwy 49 and was going to attempt to impede or block the suspect from getting through the intersection.”

Tyrone Jackson was able to get pas MHP Trooper Seals and  Trooper Little, but Rayburn spotted the suspect just north of Hattiesburg, and he engaged in pursuit.   Phillips engaged in the pursuit when when he witnessed Raburn and the suspect speed through the intersection

Phillips testified that he,

“attempted to assist trooper Rayburn in an effort to bring the suspect vehicle to a halt by attempting to either force him from the roadway, or blocking his traveling path.

Initially well behind the chase, and now caught up to Phillips at the Multi Purpose Center, Trooper Seals and Trooper Little caught up with Phillips vehicle.  Thinking he was the suspect. They radioed ahead to Trooper Rayburn instructing him to get in front of the suspect vehicle, and they would perform a procedure known as a “rolling roadblock.” Rayburn, thinking Trooper Seals is referring to the suspect vehicle, continues to race ahead and exited off Hwy 49 andonto Hwy 98.

Seals pulled up attempting to block Phillips vehicle. According to the court record,

along Phillps, instructing him to pull over.  According to testimony,

“Phillips attempted to move his vehicle around Seals’ vehicle.”

By this time Trooper Little had caught up to seals, and Phillips vehicle was stopped using a rolling road block maneuver. Trooper Seals approached Phillips vehicle and ordered him out of the vehicle. Phillips did not comply, and moved his from the steering wheel to his lap. Phillips was removed from the vehicle with a “straight arm bar,” taken to the ground, and handcuffed.

It was at this point Phillips identified himself as a Forrest County Sheriff’s office Reserve Deputy. Moments later, Trooper Rayburn was requested assistance for the suspect that he was still pursuing. Realizing the mistake, Seals left and continued to assist Rayburn in the pursuit of the suspect, while Trooper Little had to stay behind to  provide Phillips with his supervisor’s information. Trooper Little offered to get medical assistance for Phillips, since he was bleeding, but Phillips declined.

After the events, Phillips sued the officers and Mississippi Highway Safety Patrol/  There is an interesting twist to the events which will be very surprising..  Part 2 will publish later this evening and include documents.

“There are harmonica players and then there is Scott Albert Johnson… One of the best harp players in the...

Republicans have a reasonable chance of increasing their much ballyhooed super majorities, at least in the Mississippi House, in...

‘I want to assure you’: Letters from IHL commissioner shed light on controversial tenure changes

A pair of letters sent earlier this month by the Institutions of Higher Learning commissioner shed light on the...

“There are harmonica players and then there is Scott...

A source with first-hand knowledge told HPNM that the...
Forrest County

Forrest County School Board Attorney Pat Zachary has some...