Landmark Lost: An Investigation into Contractor Incompetence and the Destruction of Eaton School

“Is it the state, is it the city administration, the architect, the contractor,” asked Dave Ware, Ward Four Councilman? “I think that’s a very important question that needs to be answered. Someone should be held accountable for taxpayer dollars that have been spent on this building.”

When reading this please note – the contractor has been paid $86,000, which was 100% of the original bid and the architect has been paid $13,500 for roof plans and interior diagrams.

PREFACE TO THE DISASTER

A project which should have been a straight forward replacement of an existing roof turned into a complete and utter debacle of historic proportions. The calamity of errors now leaves an African-American national landmark on the city’s demolition list, cost to taxpayers of over $100,000, and $754,000 in structural damage according to Neel Schaeffer and Associates.  The one single requirement for the project to receive matching federal funding through the Mississippi Department of Archives and History was that the new roof pitch must match the existing roof pitch. It took three roofs and five months (November 2009 to March 2010)  to get it right; before an inadequately supported second floor, weakened from months of exposure to rain and snow; supporting heavy scaffolding, collapsed leaving the building in ruins.

It all began when local architectural firm McCleskey Associates Architects recommended the lowest bidder J. Miller Roofing of Crawford MS for the roofing job after an open bidding process.  Mr. Miller, by his own admission, had no experience in a roofing project of this magnitude or scope; and according to Ken P’Pool at the Mississippi Department of Archives and History(MDAH), Miller looked at the project as “learning experience” for future historic projects. The project was such a learning experience for Miller, neither the contractor nor his wife knew what an application for payment was. McCleskey said that both he and Bennie Sellers met with Mrs. Miller and had to “hold her hand” and that she was coming up with many numbers “off the top of her head.” When asked what her mobilization cost were (cost to get to the  project and get it started) she had no idea what “mobilization” was.  McCleskey said,” it was one of those laugh or cry moments, and I felt like crying.”

McCleskey, the architect who prepared the bid, drew the plans, and recommended the contractor, told the Hattiesburg Patriot that his recommendation of J. Miller roofing was “routine.” McCleskey explained that since J. Miller Roofing was the “low bidder”, and the company was licensed and bonded; he recommended them for the job. When reminded that the bid stated “lowest and best bid”; not just the “lowest bid”, McCleskey went on to explain that hiring someone who was not the lowest bidder might file a discrimination based and/or other litigation; which could tie a project up for months or years in court. McCleskey reiterated that recommending the lowest bidder was routine for him in order to avoid the potential litigation gambit. 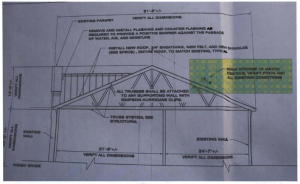 McCleskey Associates hand drew floor plans of both the first and second floors as well as drafted roof plans on the computer, which designated a 5:12 roof pitch but also noted  “Roof Pitch to Match Existing, Verify Pitch and All Existing Conditions” (see picture to left). McCleskey Associates Architects never actually measured the roof pitch, but rather, used photographs to assist in designing computer models to estimate the pitch; so the responsibility was laid on the contractor to ultimately get the roof pitch correct; a contractor McCleskey recommended. The Hattiesburg Patriot asked McCleskey how he could safely access the building’s first and second floors to measure and draw floor plans, but couldn’t’ access the roof system to obtain an accurate pitch.  McCleskey stated that it was a hazard to attempt to access and measure the pitch of the roof system, and McCleskey provided an engineering report dated December 31, 2008 by 2nd Moment, LLC Structural Engineering which stated,

“Large portions of the roof have caved in, allowing water to freely enter the building. The water ingress is rapidly deteriorating the framing at the second floor level. Large areas of the decking on the second floor are rotted to the point of collapse.”

The Mississippi Department of Archives and History provided the Hattiesburg Patriot with a written statement which stated,

“The floors on the second story seemed to be in relatively sound condition at the time that MDAH’s grant-assisted roof replacement project began in October 2009. The floors were sound enough to support the contractor’s scaffolding during several months of work on the building.”

Mississippi Department of Archives and History’s statement went on to say,

“only the central portion of the truss system appears to have been seriously enough deteriorated to have required replacement; most of the trusses could have been left in place and new material scabbed onto them to strengthen the whole.”

The original intent of McCleskey and Public Works Director Bennie Sellers was to partially replace the  roof support system by scabbing onto existing members for added strength, only replacing the  roof members beyond repair. It was decided in a meeting between McCleskey and Sellers that rather than bid the project as a rehab and replacement, it would be a full replacement. The concern at that time was once the project started for a partial replacement, further discovery might lead to additional work above and beyond the initial project scope, and result in multiple change orders from the contractor.

When the project began, J.Miller Roofing removed the entire roof and made an attempt to get measurements of the roof pitch on the ground, using the old framing members as a pattern, but disturbing the original position of the roof members made it impossible to get a verifiable pitch, and results were highly inconsistent. Furthermore, Mr. Miller lacked the skills needed for such a project, and he actually needed hands on supervision by the Architect who recommended him. Miller ultimately decided that the architect’s estimation of the roof pitch would suffice; and so the 5/12 truss system was ordered by J. Miller Roofing and installation began in early November 2009.

On November 5th 2009 (see timeline), Jeff Rosenberg, with Mississippi Department of Archives and history visited the site and easily recognized that the roof was not  the original pitch, but instead much too low.  The photo below and to the right shows where the original roof line met the flashing at the vent pipe. A few days later Hurricane Ida came through and poured rainwater into the building.

Rosenberg called Brian Jones with McCleskey Associates Architects and informed him of the incorrect pitch. Jones asked Rosenberg if  an 8:12 pitch would be acceptable. Rosenberg replied that “the only approved pitch is the original one.” (Click Here to See MDAH’s Timeline).  Rosenberg then asked Jones how they arrived at an 8:12 pitch.  Jones responded, “per Don McCleskey’s conversation with the truss manufacturer, the roof pitch was measured from the height of the vent stack.”  Once the trusses arrived J. Miller Roofing began installation of the 8/12 pitch.

Jeff Rosenberg,with Mississippi Department of Archives and History, made a site visit and photographically documented that the pitch of the second roof (8/12 pitch) was approximately two feet higher than the original, historic roof pitch; therefore, and once again, did not comply with the project’s only historic requirement. (See picture below and to the right) Rosenberg then contacted Brian Jones of McCleskey Architects and Brett Benson, the city’s grant coordinator, on December 4th.  They all concurred that  the pitch of  the second set of  trusses once again didn’t restore the original pitch and didn’t meet project requirements.

Rosenberg then arranged an on-site meeting on December 9, 2009, which included  representatives from (Mississippi Department of Archives and History, the city’s representative, Tim Pittman, the architect, the contractor, and himself.) Rosenberg then climbed on the roof and actually measured the pitch of original roof, using the surviving marks from the chimney and vent stack, as well as several original roof framing members that were still on the work site.  With the original roof already removed, it was no easy task, but Rosenberg determined to the best of his ability, given what was left, that the pitch to be very close to 6:12, and the trusses were ordered and installation began.

The second floor was severely weakened having been open to the elements for months, and both rain and snow had freely entered the structure.  Workers were climbing scaffolding, and loading the roof with decking, when the building shook like an earthquake. The second floor of the building, the floor open to the sky and elements for nearly five months gave way. Eaton School, a national landmark is lost.

The Mississippi Department of Archives and History attributed blame with the contractor as follows:

“The contractor twice installed roof trusses that did not comply with the plans and specs; he left the building totally uncovered during the months of greatest precipitation; and he placed heavy scaffolding on the second floor for an extended period of time. This combination of factors caused the collapse of a portion of the second floor, which produced a major structural crack in the building.

Because the contractor failed to follow the project plans and specifications, the school building was left entirely open and exposed to the elements from October through March. During that period there were several heavy rains and a significant snowfall  that likely accelerated the deterioration. The added weight of the contractor’s scaffold installed in the southeast room of the second story, as well as that of the temporary bracing for the second floor ceiling, undoubtedly led to the second floor’s collapse, which, in turn, allegedly rendered the building structurally too unsound for completion of the roofing project.

Had the contractor properly fulfilled his contract obligations, the roofing project would have been completed in November 2009 without problems and the building would be in sound condition. Even with his mishaps in constructing a roof of proper pitch, had the contractor properly supported his construction loads at the first floor level, the second story floor would not have collapsed. The City should investigate seeking damages from the contractor’s bonding company.

The Hattiesburg Patriot alleges that the Don McCleskey was negligent in his recommendation of J. Miller Roofing and might have possibly crossed some ethical boundaries when he and Bennie Sellers assisted J. Miller Roofing with completing their application for payment. Furthermore, that should have been a red flag to be more involved in the project. Clearly the contractor was not competent for this type of construction job.

To date, no legal action has been taken by the city to pursue the contractor’s bond, which would likely only cover the cost of the roof and not the repairs on the building. It is also our opinion that Don McCleskey should return all monies he received as payment for this project. Taxpayers should call 601-545-4500, ask to speak to the mayor and demand action. The Mayor is presently doing absolutely nothing to recover these losses from his administration’s failed project.

Please support our efforts and give a donation of $10.00. This investigation took months and required many records request and interviews.
[paypal-donation]

Podcast: The Ole Miss Rebels did it!

From Omaha, the Clevelands recount the Rebels’ amazing run to the national baseball championship. As Mississippi State did in...

An all but forgotten 1998 ruling by the state Supreme Court declaring a right to an abortion is granted...

Mississippi Today on Saturday won awards for its investigative reporting, COVID-19 coverage and general excellence at the Mississippi Press...

Ole Miss’ natty is just more proof: Mississippi is No. 1 in baseball

The Ole Miss Rebels had just won the Super Regional at Hattiesburg and were on the bus back to...

Podcast: The Ole Miss Rebels did it!

From Omaha, the Clevelands recount the Rebels’ amazing run...