There is an old saying in the legal business, "He who represents himself has a fool for a client." While Fletcher may have been the "seed money" man in this alleged fraud, as you read further, it will become questionable whether he has much sense.

The lawsuit in its entirety is a must read, and as it unfolds, it's clear his complaint is exactly the break that a Federal investigator could use to build a criminal complaint  against a number of people. Judging from the indictments of Fairley and Fletcher, that's exactly what the feds and State Auditor, Stacey Pickering did. Because the US Attorney's complaint almost mirrors Fletcher's suit against Fairley. Fletcher appears to incriminate a number of individuals, including himself, with this incredible lawsuit.

Fairley approached INTERURBAN to use its name, money, resources, and expertise. Interurban agreed, provided that all seed money was returned and Fairley would be allowed to keep his equity portion of the job."

with his inexperience caused delays and deficiencies which jeopardized the program and reinbursements."

Notwithstanding those efforts, monies with the program were still frozen leaving INTERURBAN with a $160,000 exposure plus ancillary expenses to be determined. Despite amicable demand, they have refused efforts to remedy the problem"

Fairley took on this project with the objective to complete them at less than specification costs, allotting any remaining monies to be used for other projects and/or causes. One such cause was the subsidizing of the mortgage and operating expenses of Mount Carmel Missionary Baptist Church (MCMBC)"

In order to move jobs forward, obtain permits, and comply with program requirements, it is believed Fairley may have signed unauthorized documents with the city of Hattiesburg on behalf of INTERURBAN"

Fairley requested that Dr. Fletcher provide receipts from other projects being undertaken by INTERRUBAN to enable Pinebelt to successfully complete the audit."

A meeting was attended by Johnny Dupree, mayor of Hattiesburg, Anthony Harris, Fairley, Mr. and Mrs Acey, to resolve the issues. During this meeting, Mayor Johnny Dupree suggested terms and conditions for the promissory note and was aware of the circumstances of this matterin cluding funding of the church (MCMBC). Anthony Harris also confirmed having received monies to replace his roof, Mr. Harris acknowledged and agreed that tis money should be repaid. " 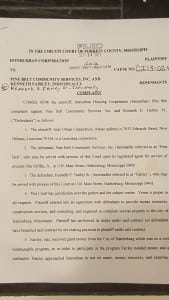 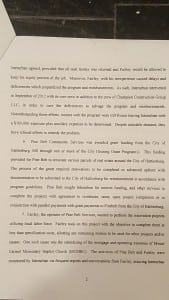 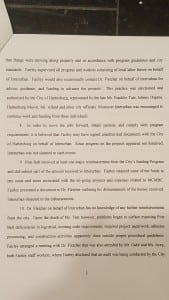 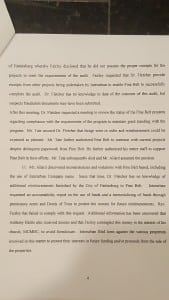 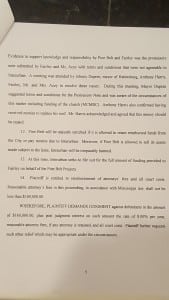 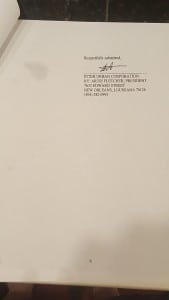