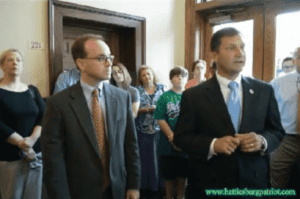 If Dave Ware’s complaint is true Johniece Dupre may have a new nickname. “Jailbird Johniece”. Dave Ware filed lawsuits in Forrest and Lamar counties against the Mayor Johnny Dupree for  improper handling and documentation of absentee ballots, the responsibility of the City Clerk, Eddie Meyers. The suite also names the election commission as defendants for certifying an election where “Irregularities affecting the outcome of the election substantially occurred in both Forrest and Lamar counties.”   The suit alleges 56% of the absentee ballots were not legally cast and should be thrown out, and that the Mayor’s wife committed election crimes,  specific alleged violations of:

Miss Code Ann. 23-15-625 and 23-15-627 alleging ” Defendants wife, Johniece DuPree, who is also a notary public, on information and belief, improperly hand carried absentee balloting materials to voters, in contravention of Miss Code 23-15-625 and 23-15-627. Mrs Dupree who witnessed 35 absentee ballot applications and notarized the 35 ballot envelopes, was not authorized by law to deliver any balloting materials from the Clerk’s Office to voters. Further, on information and belief, Mrs. Dupree pressured one or more absentee voters to vote for her husband when some of the voters she witnessed were voting their ballots.”

Jailhouse ballots are of particular concern in the complaint. Documentation for 30 absentee ballots were actually recorded as mailed out to the jail, yet 33 were returned. The suit also brings into question the integrity or capability of the notary who notarized the 33 absentee ballots. One ballot wasn’t signed, yet it was still notarized. The notary’s only job was to witness the signature. The complaint alleges, “all the applications but one initially indicated the reason for voting absentee as ‘being outside of the county on election day’. Later that reason was ‘whited out’ and a new handwritten reason for entitlement to vote was created on each application verbatim and in the same handwriting as in jail, not be able to vote on June 4. Such reason is not provided by law, see Miss Code 23-15-713 and the evidence demonstrates that the requesting voters did not offer this reason when the applications were initially completed.”

Miss Code Ann. 23-15-715 “The Clerk improperly mailed absentee ballot materials to voters that do not permit absentee ballots to be voted outside the City Clerk’s Office”

Below is Dave Ware’s Lawsuit in its entirety.

Share
Facebook
Twitter
Previous articleCriminal Election Law Complaint Filed By Former Mayoral Candidate Thomas Garmon Jr. | Two Election Officials and Candidate Named in Complaint
Next articleRaylawni Branch to Sean O’Hara, “You took advantage of a man with Alzheimers.- You owe me money, and you know that!”