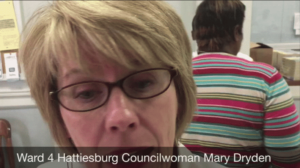 The Hattiesburg City council has been facing  the threat of protest and lawsuits over it’s controversial land application treatment method for discharging its waste water through a sprinkler type system installed in Forrest and Lamar Counties. Now, Mary Dryden, Henry Naylor, Kim Bradley, and Carter Carroll have come up with a clever plan to treat waste water in Lamar County.

Dryden and the rest of the council voted in a special called meeting yesterday to abandon land application in favor of aerial application; thereby eliminating any land zoning blocking construction of the system.

The plan would construct a pipeline from the City’s lagoons to Camp Shelby. From there the waste water would be pumped onto DC-10 aircraft, much like the ones used to treat Forest fires. The waste water would then be discharged aerially over Forrest, Lamar, Jones, and Covington Counties. According to Dryden,

We don’t need a land use permit if the waste water is discharged aerially, and as long as it’s done at altitudes over 15,000 feet, federal regulations say we can spray this wherever we want to. All the city has to do is treat the water to secondary standards, and we comply with EPA minimum standards.

A local group of concerned citizens from Lamar County told the Hattiesburg Patriot,

We aren’t taking this woman’s crap. We are suing her stupid butt in court.”