School Board President and Pastor Marcus Cathey likely broke the law with his church’s long term personal use of school facility.

Give a man a fish and you’ll feed him for a day. Give a man a position as president on the Hattiesburg Public School Board, and he might illegally use public property to build his church campus; and according to state statute, a Missisisppi Ethics Commission opinion, and the Mississippi Constitution, that’s exactly what School Board President and Pastor Marcus Cathey has done.

For many, many months, Cathey has regularly used the newly constructed Transploreum Building at N.R. Burger Middle School each Sunday at 10:00 am in order to grow his church’s congregation.  It goes even beyond that, however. Cathey is so bold that he advertises the school building’s address on his church website as being his church’s “Tatum drive campus.”  Cathey is self identified on Facebook as being “self employed,” and he is the sole incorporator of his church’s non profit, according to the Secretary of State’s website. 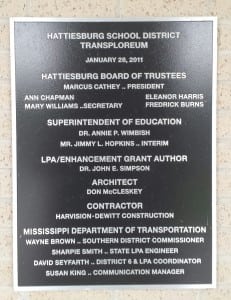 (2) No public servant shall be interested, directly or indirectly, during the term for which he shall have been chosen, or within one (1) year after the expiration of such term, in any contract with the state, or any district, county, city or town thereof, authorized by any law passed or order made by any board of which he may be or may have been a member.

Section 109, Miss. Const. of 1890: Public Officer Interest in Contracts Prohibited
No public officer or member of the legislature shall be interested, directly or indirectly, in any contract with the state, or any district, county, city, or town thereof, authorized by any law passed or order made by any board of which he may be or may have been a member, during the term for which he shall have been chosen, or within one year after the expiration of such term.

A Mississippi Ethics Commission addressed the matter in a ruling, which stated:

With a school district under reorganization due to failing schools, a human resource director, Carmen Anderson, who pleaded guilty to illegal voting, and now the school board president using public facilities for personal gain, it’s no wonder why our district is declining in size and ranking. The leadership at the top seems more interested in furthering themselves than in doing what’s best for Hattiesburg’s children.

From all appearances, Mr. Cathey is engaged in a long term lease relationship with the very school district he is tasked with overseeing, and advertising a public school building as his own church campus. Not surprisingly, never once did Cathey’s likely improper or even illegal use of the facility come up for discussion with the board or board attorney, Percy Watson. The board and it’s attorney have known about this relationship, and they did nothing to enforce the law and the ethical standards that we expect from a board that serves the public’s trust.

Ross Barnett once so aptly said,

When you can’t trust a trustee who can you trust?

**Note – The Hattiesburg Patriot made numerous calls and sent Facebook messages to Marcus Cathey for a comment. No calls were returned and no responses were received.

Parking to Be a Major Concern With Explosive Downtown Development Now...

Council violated ordinances to pass pay raises for mayor and themselves....