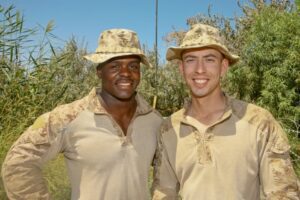 The day started out as a normal day in Afghanistan for Seaman Apprentice Byron McGill, a Navy corpsman from Petal serving with Charlie Company, 1st Battalion, 6th Marine Regiment. He checked his gear, as well as the physical condition of the Marines he cares for, and they stepped off on a patrol. It seemed no different than the many they’d conducted prior to this day.

The Marines patrolled en route to a local resident’s compound where they were going to ask questions about enemy activity in the area. The point man, which directs the routes of each patrol, was leading the squad and came upon a scene which frightened him.

Lance Cpl. Jorge A. Palacios, a Miami, Fla., native and an infantry point man with Charlie Company, said he was overcome with disbelief when he saw a child floating in the canal next to a compound.

The child was not moving when he pulled her out of the canal. He began screaming for McGill. “I personally thought she was dead,” Palacios added.

McGill rushed to provide aid in a matter of seconds. Unaware of what his fellow service member was yelling about, he was disturbed by the scene he came upon. Palacios, who is also a team leader with his squad, handed off the child and set up his Marines to form a security bubble to give McGill the safety and area he needed to work on the unexpected patient.

McGill evaluated the situation and quickly put the pieces together of what happened.

McGill immediately began administering treatment. He opened the child’s airway and then checked her chest for movement. He did not see any, and he went back to clear the child’s airway for a second time to begin rescue breathing, which is a basic lifesaving step he learned from his medical training. McGill said as soon as he cleared the 2-year-old girl’s airway for the second time using the head-tilt, chin-lift method, the child miraculously reacted.

“The baby started vomiting and choking. I picked the baby up, put her on my knee, and gave her a few thrusts to the back so she [could] get rid of the vomit and water in her mouth,” said McGill, who joined the Navy in 2008. “She continued to vomit and cough. After about 30 seconds she cried out, and that is when I knew she was ok. I grabbed a cloth and wrapped her in it and held her for a second.”

Several Marines on scene began yelling into the nearby compound to alert someone inside of the incident.

Basbibi, a local resident and the mother of the young girl, said she was inside the house when she noticed her daughter missing. She said she looked for her all over, but it was when she came to the back of the compound that she heard a lot of noise and emerged confused about what was happening outside her home.

“I was scared, because I did not know what was going on. There were a lot of Marines around,” said Basbibi. “I realized they were helping my daughter, and my fear faded away.”

McGill handed the child off to her mother and gave specific instructions on what to do to care for the toddler. Basbibi gave a sincere thank you to McGill and the Marines as they went on their way to continue their assigned mission.

McGill said it felt great to be able to save a life, and it isn’t just him doing miraculous things over here. He explained the members of the coalition forces are changing lives everyday, and he wished everyone, to include his family, could see the change that is being made.

“My wife was very proud, but I wish others could see, and my family could see, the good things we do,” said McGill.

Editor’s note: Charlie Company, 1st Battalion, 6th Marine Regiment, is currently assigned to Regimental Combat Team 5, 2nd Marine Division (Forward), which heads Task Force Leatherneck. The task force serves as the ground combat element of Regional Command (Southwest) and works in partnership with the Afghan National Security Forces and the Government of the Islamic Republic of Afghanistan to conduct counterinsurgency operations. The unit is dedicated to securing the Afghan people, defeating insurgent forces, and enabling ANSF assumption of security responsibilities within its area of operations in order to support the expansion of stability, development and legitimate governance.

Share
Facebook
Twitter
Previous articleLocal Attorney, John Lee, will plead the 5th in Bolton tax evasion trial according to court documents.
Next articleSheriff Billy McGee takes Plukey’s salary and divides it up among his inner circle, including his future son-in-law.

Blanton Hands Stunning Defeat to Groundworx in Motion to Intervene