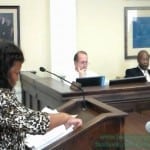 In what has become a recurring theme with the Forrest county NAACP and its close supporters, racially insensitive attacks are launched from the podium of the citizen's forum at white council members. Members of the NAACP and its leadership have made numerous, racially insensitive comments calling white city councilman "plantation managers" and having "plantation mentalities" and "plantation style government". On this particular occasion Glenda F. Funchess a taxpayer paid attorney with The Mississippi Center For Legal Services took her dig.

Mr. Garmon, editor of this news site, and small business owner spoke in response to these comments.  Garmon said these comments were "racist" and reflected people who "might as well have popped out of a time capsule from 1960".  Garmon called on leadership from Mayor Dupree to openly reject racially insensitive statements made against white members of the city council.  The mayor made no such rebuke.

CLICK HERE to read a related article and see Clarence McGee get on the City Hall steps and call our white city leaders "plantation managers" and having "plantation mentalities" like the days of 'Gone With the Wind".