Federal money is a political hot potato everywhere, but nobody’s playing the game right now like the people of Mississippi.

A firestorm of debate has erupted on social media in Mississippi following President Biden’s decision last week to forgive $10,000 of student loan debt for those who earn under $125,000 annually and $20,000 of debt for Pell Grant recipients.

The firestorm seems to have been ignited in part by Gov. Tate Reeves, who commented on social media that the student loan forgiveness plan proves Democrats hate working people. The governor warned that “welders, plumbers, laborers & other Mississippians” will pay for the educations of Harvard doctoral students who are majoring in gender education and living in California. Governor Reeves announced on August 30th that he plans to tax recipients of student loan forgiveness.

The resulting online debate examines a number of questions: Who should receive federal money and who shouldn’t? Does it help recipients or sap them of motivation? Is federal funding good or bad for the state of Mississippi?

A family-owned business started by Reeves’ father received loan forgiveness for thousands of dollars from the Paycheck Protection Program (PPP), which was created to help small business owners keep their workforces employed during the Covid-19 pandemic. A 2020 Clarion Ledger article first revealed that PPP loan, as well as another loan to Coker and Palmer insurance company, which employs Gov. Reeve’s wife, Elee.

Through his then-spokesman, Gov. Reeves stated that he and his brother, Todd Reeves, are minority shareholders in the air conditioning business, located in Pearl, and have no “day-to-day” role. However, the governor described himself as owner of Southern Air & Supply, Inc., on the Statement of Economic Interest filed during his campaign. His name does not appear on company documents filed with the Secretary of State.

Ultimately, Southern Air Conditioning & Supply, Inc., received $191,216.87 in PPP loan forgiveness, and Coker & Palmer received $346,256 in loan forgiveness. The 2020 Clarion Ledger article states that Reeves said he was “not aware of any more PPP loans for businesses where his relatives work.” 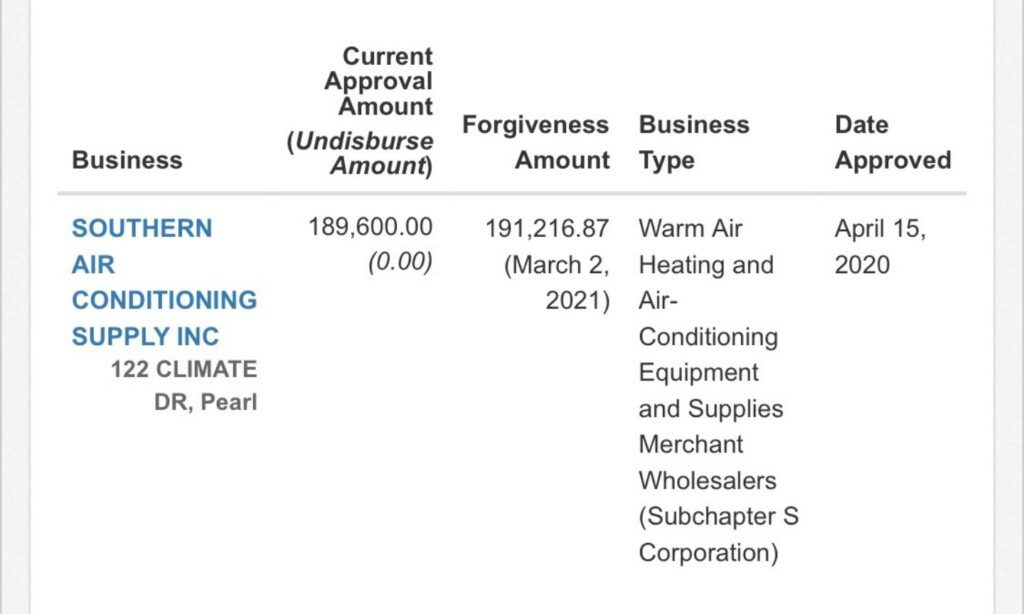 As it happens, at least three other family companies have received PPP loan forgiveness, which total an additional $1,171,256.97. They are as follows:

(1) Climate Masters, Inc., electrical and wiring contractors, received PPP loan forgiveness of $915,188.54. Documents filed with the Secretary of State’s office indicate Terry Reeves is the director, president, and treasurer, while Todd Reeves is the registered agent and vice president.

(2) Snapshot Publishing, LLC, in Flowood received loan forgiveness of $60,552.84. Lee Reeves, Todd’s wife, is the registered agent and member, according to paperwork filed with the Secretary of State.

Elected officials were permitted to apply for and receive PPP loans.

To be fair, Gov. Reeves’ social media comments about student loan forgiveness are not the only reason hot potatoes are flying in Mississippi. Other events here have contributed to the firestorm, including:

(1) The governor’s recent decision to halt the Rental Assistance Program, which provided funds to help Mississippians who lost their jobs during the pandemic pay rent and utilities.

(2) The alleged theft and fraudulent spending of some $77 million in welfare funds intended to help needy families.

Gov. Reeves’s decision to halt rental assistance on August 3rd echoes the actions of at least 25 other Republican governors, who contend that federal financial help is the reason unemployed citizens are not returning to work. So far, Mississippi is the only state to return remaining funds. In the August 3 press conference, Gov. Reeves called rental assistance and other “socialist” programs cruel, saying “they trap Mississippians in a cycle of dependency, like a loan shark or a bookie….”

The governor also has said he is responsible for the controversial firing of former U.S. attorney Brad Pigott, who was investigating the welfare fraud and trying to recoup stolen and misspent funds. The firing occurred shortly after Pigott subpoenaed records from the University of Southern Mississippi Athletic Foundation regarding $5 million in federal money that was used to build a volleyball facility on campus. That donation allegedly was disguised as a lease agreement.

The Department of Human Services has hired the Jones Walker firm to try to recover the missing millions.

The governor oversees the Mississippi Department of Human Services, which has heavily restricted the scope of a forensic audit that the state will use in court cases related to the welfare fraud. The restrictions protect former governor Phil Bryant, who was in position to influence spending; members of the University of Southern Mississippi Athletic Foundation, many of them donors to Reeves’ campaigns; retired football stars Bret Favre and Marcus DuPree; and Gov. Reeves, who as Lt. Gov. is said to have played a significant role in obtaining welfare funds for his trainer, Paul Victor Lacoste. None of these people have been charged with any crimes.