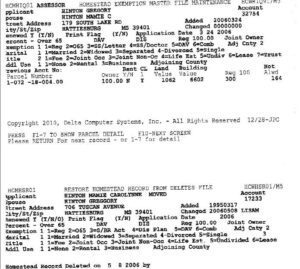 CLICK TO ENLARGE..Hattiesburg Fireman Greg Hinton moved to the county in May of 2006 according to homestead property records. Hinton is homesteaded in Forrest County outside of the city limits.

Hattiesburg Fireman Greg Hinton voted illegally in the latest special election on September 24th according to homestead property records and poll books. Hinton moved outside the city in May of 2006 and claimed his permanent residence as 179 South Lake Road near Paul B. Johnson state park. Hinton’s vehicles are also tagged in the county. At the time of this investigation Hinton was also driving a truck with expired Forrest county plates.

State law required a person to vote in the precinct in which they live, yet Hinton voted at the infamous Rowan Precinct. Hinton wasn’t the only fireman to cast an illegal ballot on September 24th.  Fireman Joe Anderson also cast a ballot using a property he owns in Hattiesburg, which had been homesteaded allegedly in violation of state law. Anderson is a resident of Jones County.  What is even more disturbing are reports that acting Chief Paul Presley allowed both firemen to leave firehouse #7 at Tatum Park to cast the illegal ballots, knowing that the two fireman were not city residents.