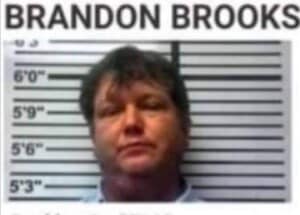 Local Hattiesburg attorney Brandon Brooks was found guilty in Lamar County Justice Court last week after a client, Christopher Patrick Lott; who was a longtime friend, filed multiple charges against Brooks for harassing him by impersonating him on Facebook. According to the court records, Brooks created a duplicate Facebook profile of Lott and used the fake profile to harass Lott, write fake reviews against opposing council involved in an unrelated case, and “to friend request to minor children.”

According to the affidavit by Brooks then legal assistant (see bottom of article), Harley Dakota Norris, Norris conformed some of Lott’s allegations. According to Norris, Brooks allegedly engaged in a number of dishonest acts including:

Christopher Patrick Lott, owner of Chompy Holdings with homes in Canebrake, Hattiesburg, and Oxford Mississippi, was the victim of the harassment. Lott stated in a sworn affidavit, “Brandon also used this fake profile to friend request minor children, attack other attorneys (George Schmidt) business page, and post disgusting comments relating to homosexuality, and inviting individuals in the same lifestyle by posting comments such as ‘Sounds gay, I’m in.'” 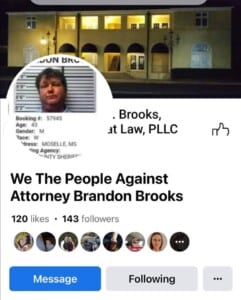 According to Lott, Brooks established the duplicate Facebook Page in early 2022, and Lott became aware of the profile on February 25th. Lott stated in the affidavit, “During this time, Brandon Brooks used this fake profile to defame, damage my character, cause emotional stress, anxiety, depression, and placed me in a role of having to defend myself against other people’s opinion of me in the church.”

Brooks was found guilty and fined $3,500. He was not sentenced to jail time. The order of guilt has not been filed in the court at the time of the publication of this article, but was confirmed with court personnel.

Brooks problems apparently didn’t start there. In the recent past, purported clients and purported former clients have taken to social media to complain about Brooks, A group was even formed titled, “We the People Against Attorney Brandon Brooks.”

HPNM spoke with Mr. Lott, who has known Brooks 26 years. Lott stated, “That profile (counterfeit Facebook page) has hurt me in a lot of ways. He (Brooks) is a a very distraught, mean spirited individual.” Lott told HPNM in a recorded interview that Brooks used the PayPal account of the deceased grandfather of his (Brooks’) sister-in-law to receive a portion of the $3,200 retainer by Lott.

If anyone has any court documents, recordings, voicemails, or messages from Brooks, that you would like reviewed by HPNM, please message the Facebook page or email [email protected]

(The mugshot used in this article was from a recent DUI.)