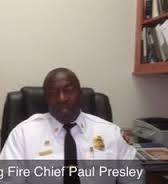 Leadership at the Hattiesburg Fire Department is becoming a disgrace. But given the history of the Fire Chief that’s no surprise. Chief Paul Presley never took the exam to become assistant chief, which is required by the Civil Service Commission. Mayor Dupree allegedly told Presley that he didn’t have to take the exam. Chief Presley also allowed Firemen Joe Anderson and Greg Hinton to leave the fire station to vote illegally during Hattiesburg’s mayor election, knowing that they were not residents of the city.  In doing so, Presley enabled the illegal voting to take place.

“He hasn’t done anything [wrong] within the department,” said Presley of Anderson.

Anderson plead guilty to voting illegally voted in the 2013 Hattiesburg mayoral election.  Joe Anderson, his wife Carmon, who is the Human Resources Director for Hattiesburg Public Schools, and the City of Hattiesburg’s Public Defender Alethea Shaw all pleaded guilty to voting illegally. They are ordered to pay $420.84 to the Forrest County Circuit Court, will serve 6 months probation, and be subject to alcohol and drug screening.

The Hattiesburg Patriot was the first news source to uncover the illegal voting involving the Andersons and Alethea Shaw.

Chief Presely and Joe Anderson are very close friends according to HP sources.