“Start Corrupting. We Really Have a Job To Do.” T’kia Bevily’s Team Imploding on Facebook in Wake of Criminal Investigation.

Those who have followed HPNM in recent months no doubt know about the T’kia Bevily Trial. Bevily stood accused of capital murder of her fourteen-month-old step-daughter, Jurayah Smith back in October of 2017. Bevily was convicted of Capital Murder in Claiborne County in January of 2019 and sentenced to life in prison. After the trial, Bevily’s new attorney with the Cochran Firm in Jackson filed a post trial motion and asked that the the conviction be vacated or in the alternative remanded for new trial on the basis of jury misconduct. A new trial was ultimately granted, and Mrs. Bevily was released on bail after having served nine months in prison.

Soon after the trial, Bevily’s brother, Christopher Smith, assembled a group of friends, 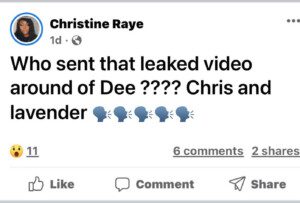 family, and supporters and drove interest. They held cook-outs, sold t-shirts and built a substantial following on Facebook under the “I Stand With Kia” brand. The leadership group of this movement even proclaimed themselves “The “Dream Team,” but to DeDruana Smith, after the death of her daughter, they were her new nightmare. She became the primary target of a coordinated smear campaign. Fake profiles began surfacing on both sides, and evidence began leaking out. Autopsy photos were even published on Facebook by a fake profile, who purported to be a supporter of Jurayah’s cause. Now the truth appears to finally be coming out. 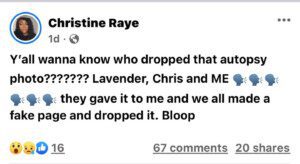 The new trial for Mrs. Bevily was set for May 2nd, 2022 and a change of venue was ordered to Monroe County. Shortly before the trial, Mr. Smith’s page published  a screen shot of a polygraph, which asserted that Mrs. Bevily passed the test and was innocent of the murder of baby Jurayah. But he didn’t stop there. He paid Facebook to advertise the post in Monroe County, where the case had been moved due to pretrial publicity in Claiborne County. Judge Irving ordered an investigation, on the record in open court, into criminal contempt of court, a felony. Bevily was acquitted of the murder in May of this year and things became quiet, until now.

Now, one member of the inner circle, Christine Raye, went public and has disclosed the inner workings of the dream team’s harassment and smear campaign of baby Jurayah’s mother, DeDruana Smith and their attempted corruption of the prospective jury pool in Monroe County.

A text message obtained by HPNM (pictured) between two members of the now defunct “Dream Team,” Kim Ducksworth and Lavender Hibbler, show that they worked to undermine the system of justice in the T’kia Bevily trial by joining groups in Monroe County and Aberdeen

Mrs. Raye has effectively handed potentially very incriminating evidence, to prosecutors on a silver platter, which implicates Ducksworth, Hibbler, and possibly Mr. Smith in criminal contempt of court, a felony.

It’s unclear at this time if the investigation is ongoing, but if not, this new evidence is likely enough to at least obtain warrants for the social media accounts of Ducksworth and Hibbler.